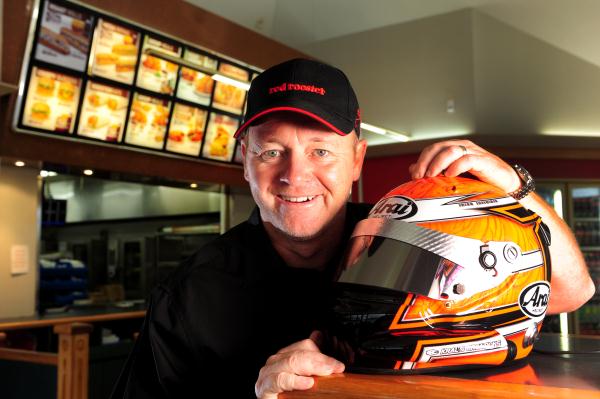 Purchase this photo from Star Photos: 111468

AUSSIE motorsport champion Jason Bargwanna is used to life in the fast lane on the track, but he is now making a name for himself off it in the fast food business.
Warragul-based, Jason first dipped his toe in the water of Red Rooster ownership two years ago.
He and his wife now own four stores – in Hampton Park, Fountain Gate, Hastings and Pakenham West.
“After 20 years in motor racing I still do have a role but I wanted to build a business,” he told Grow.
“I worked at McDonald’s as a kid on fries, and was interested in business.
“Red Rooster was a brand that appealed to me – it’s Australian and it produces a product both my wife and I are happy to sell.”
Jason won the 2000 Bathhurst championship alongside Garth Tander and is still involved in the sport in an official capacity.
He said the opportunity to grow his business within the Red Rooster franchise network was a particularly attractive one for he and his family and they’re always looking for ways to continue that growth.
“Both our kids are in the business as well,” he said. “It’s a real family business.”
With a focus on the Casey Cardinia Region, Jason says he couldn’t have a better customer base.
“It’s an area with young, developing families with both parents working,” he said.
“It’s a really good customer base from which to grow the business.
“We’ve got more than 100 staff and a lot of those are kids from the area with their first jobs.
“For us it’s a real privilege to be able to start some young people on a career. Some have gone from working on a register and making fries, to actually being managers within our business, so there are growth opportunities there.”
Jason said that after a long period away from the fast food industry, it all came flooding back on one of the first days he fronted up for work.
“We really love the business and the fact that we can offer customer service and interact with our customers, and that we’ve got a good crew that run our stores,” he added.
Jason still maintains an involvement in Australian motorsport, including at the top level as the V8 Supercars’ driving standards observer.
Between that and his Red Rooster business, he’s found a great mix.
“I still do a little bit of racing as well, but with 20-odd years at the top level of Australian motorsport if you shook me around and turned me upside down there’s a fair bit of information that’d fall out the top of the skull, so they’ve asked me to come along and over the past couple of years I’ve also played a role as the driving standards observer,” he said.
“For some people probably the best way to describe it is the head umpire or referee.
“Quite naturally you’re the bloke who has to make the tough decisions and the Christmas card list tends to get shorter and shorter each year.
“I still love the sport – I’ve grown up in the sport and committed a lot of years to it, and there’s a lot of respect up and down pit-lane for the role I do.
“Some weekends the guys hate you, but some weekends they love you. That’s just the way it goes.”
For Jason, there are definite similarities between life on the track, and in the stores.
“In motorsport you need to be organised and disciplined, and you need to stick to programs and you need to be on top of every little part of what you do to get the most out of your performance,” he said.
“It’s no different in business – you need to be quite disciplined in how you go about it, you need to be organised and stick to plans and that’s how you execute your results.
“In terms of motor racing, you spend years building relationships and developing sponsors and working within the business you learn a lot about negotiations and so forth and all of that translates very quickly to our Red Rooster business.
“Everyone who owns a business knows how tough it is these days and we’re out to try to build our business and develop a future that our kids could grow up in.
“They both work in the stores now but, who knows, they might also become part of the ownership of the business over the years to come.
“If we can grow the business to more stores and offer a better service, then that’s our goal.”