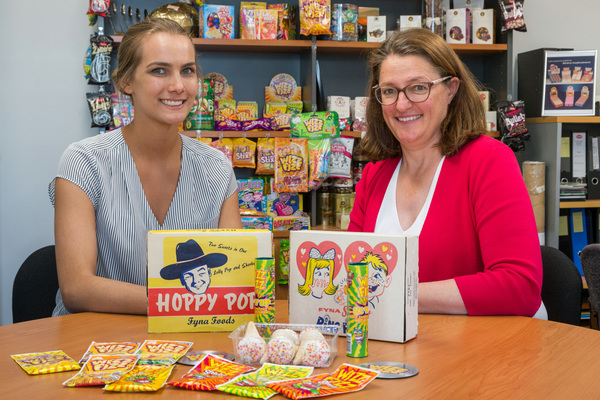 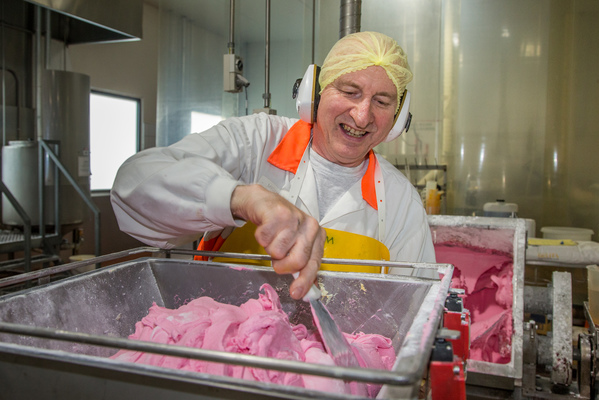 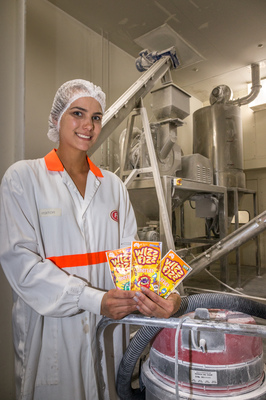 The bright colours and quirky characters adorning the packaging of Wizz Fizz is a sight most Australians are instantly familiar with. However, what they might not know is that the sizzling sherbet is proudly Australian owned and produced locally by Hallam based company Fyna Foods.
Wizz Fizz is an Australian confectionary icon whose origins date back 70 years to 1947, when Marjorie and Arthur Campbell begun their home-based jam business.
As Fyna Foods current CEO Gillian Powell explained, it was while the Campbell’s were making their jam that Arthur noticed “a bit of a gap” within the confectionary industry that would ultimately alter the face of Australian sweets.
“When you’re making jam you’re boiling up fruit at a very high temperature; not unlike how you make lollipops,” Gillian explained.
“So Arthur thought, well okay we’re making jam, let’s make lollipops. So they started making lollipops and he decided that the lollipops needed something in them to give them a bit more taste so he developed a recipe for sherbet to put inside the lollipops.”
So popular was the sherbet amongst Arthur’s workers, it was suggested that the fizzy powder be bagged and sold separately; ultimately leading to Wizz Fizz’s original products Hoppy Pops and Ring Fizz.
“The Hoppy Pops were one of our early products where you had a lollipop that dipped into the sherbet,” Gillian said.
“Then there was ring fizz which was a plastic ring with a lolly pop on it and you would drip the ring in the sherbet.”
Nowadays, the Fyna Foods name has expanded to include brands such as Superior Liquorice Co, Big Boss Candy sticks, Fads Fun Sticks, Pink Lady Superfine Chocolate, Ballantyne and Australian Bush Friends chocolates. The once back-yard business has grown exponentially, now employing around 88 individuals and another 10 to 20 casuals depending on the time of the year.
And while the Fyna Food story begun in Yarra Street Abbotsford in the 1940s, it was later moved to a new facility based in North Fitzroy in the 1970s before finding its current home in Hallam in 2001 where it was “able to accommodate all areas of manufacture under the one roof, storage of raw materials and finished product, research and development, and state of the art manufacturing equipment“.
Yet despite its brand additions and facility upgrades, Gillian maintains that Wizz Fizz has continued to claim the title of the biggest seller, with the Hallam factory producing around 50,000 sachets of Wizz Fizz per day, roughly equating to over 15 million packets per year.
So what is it that’s made a small pack of sherbet last well over half a century?
“I think Terry (Campbell, the current Fyna Foods Chairman) puts it quite well; because it’s a fun, interactive product,” Gillian said.
“You eat it off a spoon and whether you tip the spoon upside down, it’s interactive … there’s nothing else like it.”
However, regardless of its longevity, Gillian admitted that Wizz Fizz and co haven’t been without their ups and downs, having faced both a heightened sugar awareness in the community and the challenges brought on by choosing to manufacture products locally.
“We don’t advocate anyone eating sugar every day because it’s not good for them,” Gillian said.
“But (Wizz Fizz) is a part of fun and it’s a part of parties and we want to be a part of every party and that’s our motto – it’s not a party without Wizz Fizz.”
While the company has joined the Be Treatwise campaign, there are no signs of the Wizz Fizz era coming to an end, with Gillian confirming that sales of Wizz Fizz as a brand – including Wizz Fizz Sherbet, Wizz Fizz Cones and the other Wizz Fizz brands – increased by 21% in the 2017 financial year, and in the 2018 financial year to the end of October, sales of Wizz Fizz as a brand increased by 15%.
“I suppose one of the biggest challenges (we face) is that manufacturing in Australia is incredibly challenging,” Gillian said.
“And the other challenge is the overseas import. In the market we’re competing in, there’s a lot of cheap stuff coming in from overseas and so we compete against those – so the overall challenge is maintaining our sales sufficiently so we can invest in our factory. And that is probably our key challenge in our business – because we want to invest back in our factory and our people.
“And Terry and the family, Arthur especially, like employing people,” Gillian explained.
“Arthur got great satisfaction out of employing Australians and I know Terry feels very much the same way. His (Terry’s) key focus and interest in this business is the fact that we’re making products in Australia and we’re employing Australians. He comes here every Monday and the thing he enjoys the most is going out on the factory floor and seeing all the employees – having a chat to people, seeing how they’re going and seeing the factory. So he gets great satisfactions out of that.”
Have you got an interesting business story? Email dailyeditor@starnewsgroup.com.au