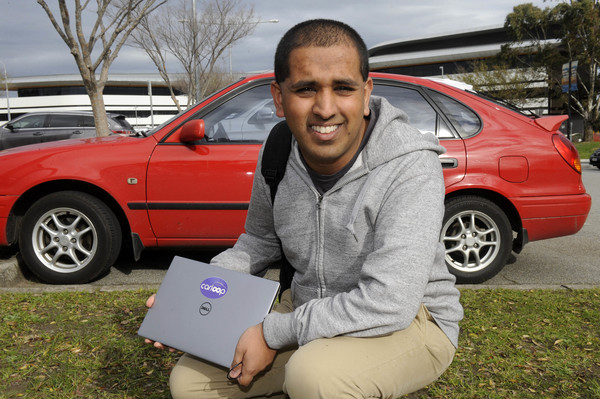 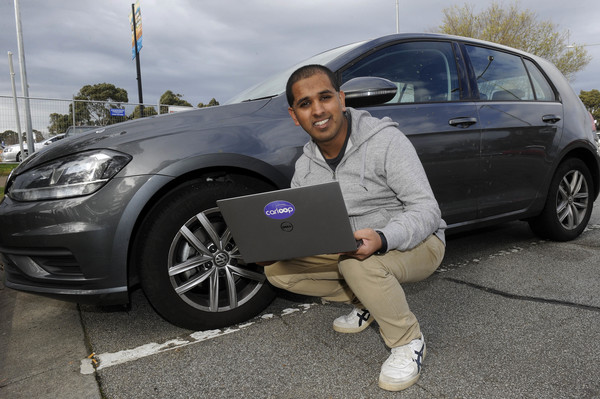 Chances are if you step into Riz Akhtar’s Volkswagen Golf as an Uber passenger you will be asked what car you drive and what was the experience like when you purchased it.

Riz, 28, is the founder of dot.com start-up Carloop.

Like many tech entrepreneurs he is Uber driving while he ploughs most of his time, energy and passion into his website.

After 18 months in development, Carloop went live at the start of July promising to “put Aussies in the driver’s seat to buy confidently”.

“You talk to people. You’ve got them for a bit of time so you try different pitches and see what works and doesn’t work, what clicks with certain demographics. I collate all that information at the end of the night.

“I’ve met some really great people and I’ve built some really good connections. I’ve met the CEOs of companies as an Uber driver.”

Riz was born in Pakistan and immigrated with his family first to New Zealand and then Australia as a boy. The family settled in Doveton and Riz attended Hallam Secondary College.

He studied at RMIT for an associate degree in engineering , before transferring to mechanical engineering.

While at university, Riz secured an internship with Bosch at Clayton and later worked on the Wonthaggi desalination plant.

A job offer from Boral took him to Queensland where he worked on infrastructure for the 2018 Commonwealth Games as well as high rise projects on the Gold Coast. By 22 he was managing a team of 80.

His goal to climb the corporate ladder was interrupted when his mum fell ill and he returned to Melbourne.

After a stint in health care at private hospital Cabrini, Riz decided he had had enough of corporate life.

“I wanted to find a place where the culture was a lot better. The industries I was working in were cut throat, the hours were long and they were controlled by government budgets,” he explained.

“I had always been interested in technology and cars and the automotive industry in general.”

The idea for Carloop first started nagging at him while he was working in Queensland.

“When I moved to Queensland I didn’t know anyone there and the only people I knew were my work colleagues. They knew I was into cars and when you’re into cars everyone comes to you when they are buying a car for advice and help dealing with the dealers.

“Because I helped quite a few of them I realised we were all wasting time talking to people that consumers generally don‘t trust.”

Riz decided there must be a better way to avoid the countless hours consumers spend visiting dealerships, comparing prices and negotiating the purchase of a new car.

Carloop shows the prices dealers are asking for more than 60 popular makes and models of cars and compares those prices to what Australians are actually paying for their cars.

Riz said his aim was to bring trust and transparency to the industry.

He hopes Carloop will save consumers thousands of dollars.

“I’ve heard stories of people who have gone from one dealer to another and saved 10 grand,“ he said.

“The industry is just not transparent. Consumers feel like the dealers are there to get them and the dealers feel the same thing.

“I thought there is a better way to empower Australians to save time and money and be that trusted helpful source. “

Consumers can receive a personalised sales report in under 24 hours based on their geographic location.

“I got a testimonial from a guy in NSW who said a process that would normally take him four weeks with our report he was able to do it in under a weekend.“

“So far of the people who have requested reports 30 per cent are female. We want to increase that number. We are trying to make the site as easy to use as possible, not because we want to attract women but because it is targeted at everyone.“

He hopes profit will come down the track via Carloop directly linking consumers to reputable dealerships in their area.

Riz hopes dealers will embrace Carloop and see it as a way to cut their overheads and save their salespeople time.

“Dealers may not be happy initially but long term vision is huge.”

Riz has been sharing his dot.com journey by mentoring other young people who have bright ideas for the digital space.

He is excited to be involved with the INNovation Crowd, a Casey Cardinia Region start up ecosystem, that will providing mentoring, meet-ups and help create the jobs of the future in the South East.

“I mentor a lot of young people. There are a huge benefits for mentors and mentees to work together in the South East. We have enormous opportunities.“

In five years Riz says he wants Carloop to be “a trustable, transparent platform that Australians know and trust to be able to save them time and money and the hassle that comes with car buying“.

“Every morning I get up at 5am and get nothing for. I really want to solve this problem. I come across it all the time. There are thousands of people talking about it every day, but not many people are trying to solve the problem.”

When he’s not interrupting the car industry, Riz likes to get behind the wheel of his Volkswagen Golf and head to the Dandenong Ranges.

And his dream car?

“My dream car is a BMW M5. I believe I have achieved a lot in my life considering where I came from, at the same time I am not the type of person who will show off. It is the type of car that can go fast but it looks like a normal car. I can’t do a Lamborghini or a Ferrari. That’s too much.“